Having turned 12 earlier this year, Max Bevan certainly wasted no time in progressing to the next stage of his early speedway career, making the step into Junior Formula 500s this season.

A thoroughbred speedway racer, with his dad Paul having competed in numerous classes over the years, including Sprintcars, Speedcars, Lightning Sprints and Legend Cars, Bevan commenced his own competitive racing career at the tender age of eight via Speedway Karts.

Honing his skills as a Speedway Kart racer over the past five years in the age-based K9 and K12 classes, Bevan enjoyed a competitive introduction into speedway, with his time highlighted by winning an Australian Championship and an overall NSW Club Championship for his class, along with collecting multiple minor NSW Title podium finishes.

Making the decision to move into the open-wheel Junior Formula 500s class, which has a minimum driver age of 12, prior to the start of the 2018-19 season, Bevan underwent his induction into the class at Gunnedah Speedway, completing a theory and practical test and passing both with flying colours.

Bevan, who lives in the NSW Southern Highlands town of Colo Vale and who recently made his Junior Formula 500 debut aboard his NSW # 68 Penrite supported R6 Yamaha powered Murphy car, contesting two race meetings at Gilgandra Speedway, is excited about his move into the class and the rest of the season ahead.

“I’m having a lot of fun in Junior Formula 500s and hopefully this is the start of my goal of building a career in motorsport,” enthused Bevan, whose addition has bolstered Junior Formula 500s’s foothold in NSW, joining other active members JacLaneyrie, Kendall Alcorn, Rylie Fisher and Blake Matthews.

“It’s great that we get to race on the same night as the seniors in Formula 500s, as it gives me the opportunity to watch what they do and learn from them and improve.”

Designed specifically for racers aged 12-16 years, a Junior Formula 500 is essentially a regular Formula 500 that has been fitted with a restrictor plate, which ultimately reduces speed, making the cars safer for younger drivers who are just starting out in the class. When drivers reach the age of 16 and move into the regular Formula 500s class, the restrictor plate can easily be removed allowing the same car to be run, making them a very appealing option for both drivers and parents.

To find out more about Bevan and his team, LIKE them on Facebook by searching for Max Bevan Racing. 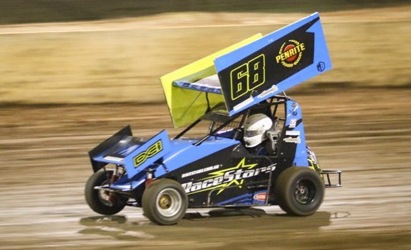