The Australian Championship is the event that every driver strives for, and Josh Buckingham last weekend at Goulburn Speedway in NSW achieved this honour by taking out the 2018-19 season running of the Australian Formula 500 Championship.

“It’s an honour to be the Australian Championship holder for the next 12 months, and to have my name on the trophy that has been won by so many of speedway’s legendary drivers is something pretty special to achieve.”

After heading into the Australian Championship in solid form, which included claiming the South Australian Title for the second occasion in his career along with top-three finishes in both the Victorian Speedweek Series and Victorian Stampede Series point scores, Buckingham was pleased to be able to take his form to another level.

“Winning the South Australian Title again gave me plenty of added confidence leading into the Australian Title, and I felt good that we were as good of a chance as anyone in the field,” noted Buckingham, whose previous best Australian Championship result was a third place back in the 2016-17 season event at Murray Bridge Speedway in South Australia.

“Earlier this season I had been right up there in both the Speedweek and Stampede Series point scores but I had a bit of bad luck that denied me of a better winning chance, so I’m glad that everything fell into place for me throughout the Australian Championship and I came away with the win.”

Following six seasons in Formula 500s and another six seasons before that in Junior Sedans, Buckingham is now exploring his 2019-20 season opportunities.

“I’m not really 100 percent sure what my plans are for next season, but one thing is for sure, I’ll be contesting the bulk of the major Formula 500 events on the east coast, especially now that I’m the Australian Champion,” the Vic # 49 GT Recycling / GGS Bathroom Solutions supported Yamaha R6 powered PMP driver commented.

“I’d love step into another class in the near future, such as a Sprintcar or a Speedcar; however, that will all depend on budget and what sort of opportunities that present themselves.”

Running on a small budget and the support of his family and friends, Buckingham was a popular Australian Championship winner. One thing that is for sure, he is certainly not going to take this moment for granted.

The debut event for Buckingham as Australian Champion will be in this Saturday night’s Ken Willsher Classic at Laang Speedway back in his home state of Victoria. 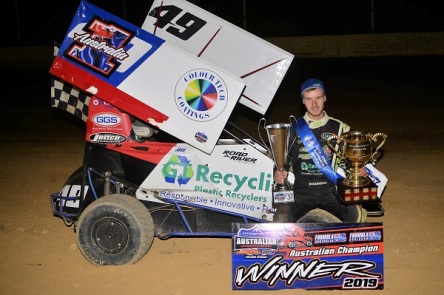