Despite having only completed a total of seven race meetings throughout the 2018-19 season so far, James Kennedy hasn’t shown any sign that the lack of track time might be hindering him; in fact his results prove quite the opposite.

Contesting only the major shows throughout the season, the 22-year-old Formula 500 racer has become the exception to the rule that more track time will lead to more results, with the prestigious Ken Willsher Classic being the only event where he did not finish on the podium due to the feature race being rained out after qualifying 10th.

Well and truly making his presence known during the Australian Title at Goulburn Speedway, Kennedy managed to improve on his previous best Australian Title finish, which was a fifth place at the 2016 running of the event at Gunnedah Speedway, coming home in an impressive third place.

Backing up this result during the Queensland Title at Maryborough Speedway, the Brisbane, Queensland-based racer managed to clinch his fourth consecutive Queensland Title podium result, this time coming home in third place aboard his Qld # 29 Yamaha R6 powered Stallard car, following a trio of runner-up finishes.

“Given that it was a fairly reduced schedule for us this season, we’re really happy with what we were able to achieve,” said the 2017 Speedway Australia Rising Star participant, who also picked up a feature-race win at Brisbane’s Archerfield Speedway during a round of the Brisbane Nupave Ashpalt Services Series.

“We were able to remain consistently competitive, particularly up again some of the country’s best drivers, which is exactly what we’d been focusing on, so we’ll look to do more of the same next season.”

The 2018-19 season will come to a close for Kennedy on the Saturday night of May 25 at Archerfield Speedway for the Jettco Developments Brisvegas Jackpot.

Next season, Kennedy plans to increase his schedule to around a dozen race meetings, along with participating in the Australian Title, which is set to take place early in the season at Simpson Speedway on December 20 and 21 as a precursor to Victorian Speedweek. He will also compete in the Queensland Title and numerous other blue-ribbon events.

Special thanks go to Kennedy’s mum Kerry, Dave Fanning, and the Iverson family.

To find out more about Kennedy and his team, LIKE them on Facebook by searching James Kennedy Motorsport. 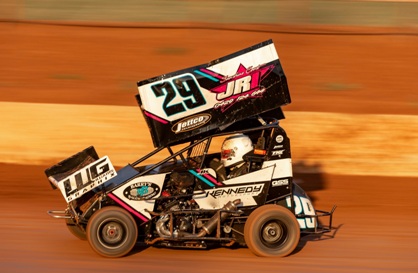