Glenn Carstairs has tonight shown once again that he is a force to be reckoned with as he claimed his second feature win from as many starts at the Perth Motorplex.
Carstairs grabbed two third places in the heat races to start on the front row alongside Mark House, who claimed a heat win and a fifth to be the top points scorer.
As the fifteen lap feature race went greenit was House who got the jump, with third placed starting Chris Dymock using the inside to momentarily take second in the opening turns before Carstairs powered around the outside and grabbed the position back.
Cody Turacchio, starting from position four, then drew alongside Dymock at the line as they completed the first lap, then went past him in the next turns to take over the third place running.
Up front House had begun to build a gap by the end of the second lap, but on the third circulation Carstairs was able to close the distance, then dive underneath in turn four to draw alongside him, the two just 0.028 seconds apart as the fourth lap was completed.
The next time around Carstairs continued to use the low line to scoot under House and clearly lead the race as behind them Cody Turacchio was also closing and ready to pounce on House. Chris Dymock was also not that far away as the rest of the field dropped away from the leaders.
Lapped traffic came into play on lap ten, the same time as Turacchio made his way past House for second. Dymock also went through, putting House back to fourth, but immediately after Turacchio also headed infield, handing Dymock third.
House continued to drop back through the field as his right rear tyre proceeded to deflate, Luke and Jamie Nardini also making their way past him. Eventually House came to a stop in tun two, bringing out the yellows with thirteen complete and setting up a green white chequer restart, Carstairs to lead away Dymock, Luke Nardini, Jamie Nardini and Brendon Marshman.
Carstairs survived a brief challenge on the restart from Dymock and was able to go on to claim the win, his eleventh at the Perth Motorplex and second in a row, defeating Dymock and Luke Nardini.
The Formula’s will now head down to Collie next weekend, Saturday the 16th of November, for Round Two of the Fuel Distributors of WA West Coast Series, so stay tuned because the action is only just beginning to heat up! 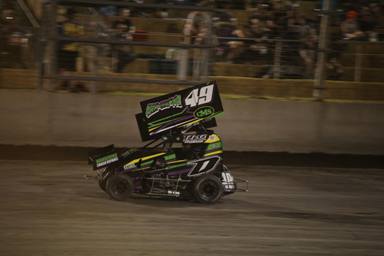 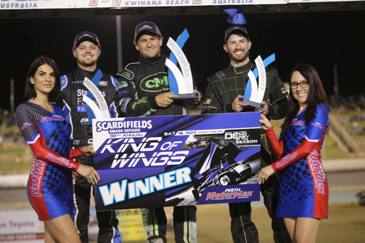