Young Victorian speedster Jordan Rae has started his 2019/20 speedway season with a podium at one of Australia’s most prestigious F500 races, The Jack Willsher Cup, held at Premier Speedway.
Fresh off capturing back to back TAG Light Victorian Country Series titles in his Arrow/X30 kart, Rae rolled confidently into the speedway season after a shake down at Simpson Speedway.
Jordan opened his account with a second place in his opening heat, duelling with former Australian Champion Dylan Willsher for the distance. Backing up in his second heat, Jordan swiftly moved his TJ chassis number nine from tenth to third, the car looking right in the sweet spot.
Those two results put Jordan off the inside of the second row for the final, starting behind Tim Rankin and current Australia 1, Josh Buckingham. After getting jumped by Willsher at the start, the two raced wheel to wheel for several laps before Jordan made the decisive move into turn one on lap 17. He set off after Buckingham, but ran out of laps and settled for an impressive third place.
Jordan set the fastest lap in his opening heat, his time of 12.875 being the fastest recorded for a Formula 500 for the night, and comparable to the back markers in the 410 Sprintcars.
Whilst Jordan’s result was big for Rae Motorsport, just as impressive was the performance of Brock Rae in his first F500 start. He kept it clean, improved each time in the heats and did enough to lock straight into the A Main. After 20 laps he finished seventeenth in an awesome first run, giving every indication he will do very well in his rookie season.
Rae Motorsport will be back in action this weekend at Avalon for the opening round of the TJ Chassis Victorian Stampede Series.
Thank you to our 2019/20 Supporters:
- TJ Chassis
- The Car Wash
- AHR Media
- Westvic Sheds & Garages
- Heywood Lime
- HD Tilt Tray Services
- Lethal Race Wings 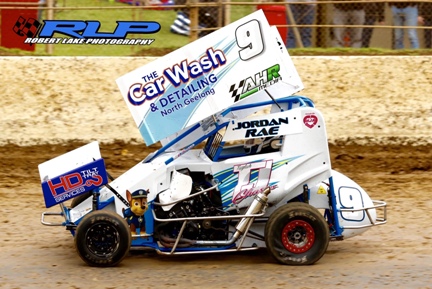