Steven Ellement has tonight extended his lead in the all-time wins tally at the Perth Motorplex, grabbing his twenty fifth career feature win at the venue in front of a great crowd.
The night was nothing short of entertaining, with drivers battling to get a grip on the track as well as fighting their own mechanical gremlins, names like Matt Brown and Mark House succumbing to motor issues and Jeff Ross going upside down in a heat race and bringing their respective nights to an early end.
This left a field of thirteen cars of the original seventeen starters to take the green in the fifteen lap feature, Cody Turacchio and Steven Ellement sharing the front row.
Unfortunately the nights dramas didn’t end there, Turacchio not taking off at the start, seeing the field bunch up and somehow avoid him as he rolled to a stop.
Because of the stoppage, Turacchio was sent to the rear, elevating third place Jamie Nardini to the pole position. He would take full advantage of this, grabbing the lead as the race went green once again and leading the opening lap.
From here though it was State Champion Ellement who quickly took control of the race and began racing away from the rest of the field.
With three down it was Ellement leading Jamie Nardini and Chris Dymock, with Turacchio already racing back into fifth, then passing George Eaton for fourth.
Shortly after, the yellows came on as Damien Della and Amy Waldron came together and spun in turn four. On the restart Luke Nardini was relegated for being out of line on the initial start.
Ellement would lead away Jamie Nardini and Dymock, with Turacchio quickly passing Dymock to grab third place.
As the laps wound down the top three would close in on each other, but they ran out of time to make any changes, Ellement going on to claim another win at the venue crossing the line ahead of Jamie Nardini and Turacchio.
After tonight’sshow, Glenn Carstairs still leads the Perth Motorplex Track Championship, now just ten points ahead of Chris Dymock, with Turacchio another ten points back in third. Of course, this can all quite easily change as the Formula’s will be back in just two days for another crack!
Yes that’s right, the Formula’s will now have a tiny break before returning to the track again this Saturday for the annual Muster event at the Perth Motorplex! Stay tuned! 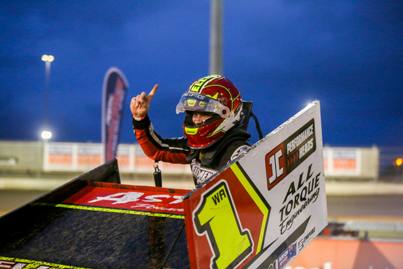 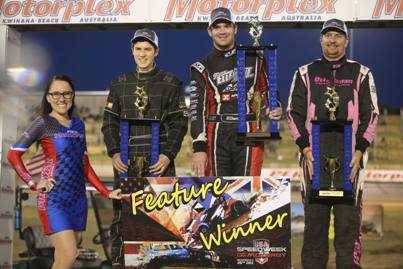