Just two days after their last show, the Flying Formula 500’s will return to the Perth Motorplex tomorrow night for what will be the annual Muster show, their fourth event at the venue this season and the last for 2019.
An almost identical field from what raced at the Boxing Day show have nominated for the Muster event, with the only change being the omission of Jeff Ross, who found himself upside down last night.
Steven Ellement would come in as a hot favourite, convincingly winning the Boxing Day feature, his twenty fifth at the venue, and he will be keen to repeat those efforts, as well as grab his third win in the Muster, his first since the 2010/11 season.
Ellement of course can be expected to be kept honest by the rest of the field, none less than Cody Turacchio who qualified off the front row for last nights feature race, got sent to the rear and then raced his way back through to finish third. With a little more luck, Turacchio could well break through for his first ever Perth Motorplex feature victory.
Jamie Nardini was also in great form at the last show, putting in a consistent effort across all races then putting in a great set of laps to come home second. He too has been close to a feature win at the Motorplex on a number of occasions, so tomorrow could be his big chance and he would love to emulate his brother Luke’s efforts of winning the Muster event back in 2017/18.
Glenn Carstairs had a quiet night by his standards at the last show, but the two time and defending Muster winner still leads the Perth Motorplex Track Championship. The gap is now just ten points though, so Carstairs will be looking to build that margin back up tomorrow night.
Chris Dymock is the man who sits just behind him in the Championship and after a strong fourth place finish last night, will be confident of another good showing and keen to get back on top of the ladder.
Matt Brown and Mark House both suffered engine woes last night so are in a race against time to even hit the track tomorrow, while David Carstairs also struggled with mechanical issues that saw him miss the feature on Boxing Night. Fingers crossed for all three of these drivers.
Amy Waldron also fought mechanical issues all night, finally hitting the track in the feature and getting going until contact with Damien Della saw her race come to a premature end, while Della went on to finish twelfth. Both drivers are expected to return tomorrow night with an improved result.
Add in George Eaton who was fifth at the last show, Jamie Pages who followed him home in sixth and James Dawson, Todd Broadwood and Matthew Edwards who claimed positions nine through to eleven respectively in the last feature and we have another good field set to battle it out for the win in the sixteenth annual Muster event.
Cars will be on track from 4.30pm on Saturday night, with the first of two Formula 500 heats scheduled for 6pm and the fifteen lap feature slated for 8.20pm.

Pics: Steven Ellement was all smiles on Boxing Night….can he go back to back tomorrow night and grab his third win in the Muster event? Pic Courtesy Flash Fotos and Graphix. 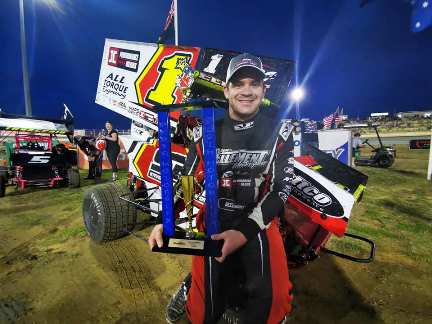