Rolling into Formula 500 Speedweek with car speed, and a building confidence, Victorian hot shot Jordy Rae has put himself in the frame for a strong series result at the halfway mark.
After taking in rounds at Simpson, Mt Gambier and Hamilton, the driver of the V9 TJ Chassis has not finished an A Main outside the top five and sits amongst the top runners in the Speedweek points score.
Round 1 at Heytesbury Stockfeeds Simpson Speedway saw Rae open his account in perfect style, winning heat 1B by 1.4 seconds. Moving to the back row for the start of heat 2A, he moved forward until collecting an infield tyre, badly bending a steering arm. He steered the wounded V9 home for a sixth place finish.
Starting the A Main on the outside of the third row, the 19 year old from Bannockburn continued his pace from the Australian Title, moving forward in the star studded field. After an intense early battle with Josh Buckingham, Rae moved to third and gave chase to the leaders, almost getting in touch for a shot at the win at the end. Rae home in third, behind QLD star Kaydon Iverson and fellow Victorian Jack Bell.
Venturing to SA’s Borderline Speedway for round two, Jordy scored a back row start in his opening heat at Mt Gambier. Fully understanding what he needed to do, he charged through to third place in a fine drive. Heat 2C had Rae lined up along side Iverson on the front row in a tantalising prospect. Iverson was smooth and fast and got the better of the battle, but had the V9 in his back pocket the whole way in a promising run.
Two solid heats saw Rae stick his TJ Chassis on the outside of the front row for the A Main, with Buckingham on the pole. Rae got the early jump and led the opening lap, before an epic battle ensued with Buckingham. Contact with the back straight wall bent the ladder on the rear of the V9 causing the car to tighten up. A stoppage gave Rae a chance to move the car around on the track to assess the problem. Iverson slipped by and went after Buckingham, before Terry Rankin challenged Rae. The pair raced hard and fair to the end, collecting third and fourth respectively.
Western Speedway in Hamilton played host to round 3 in hot and dusty conditions. Track conditions were challenging and caused some delays for F500 competitors. Rae appeared in heat 1C and put on a very strong performance to win comfortably. Conditions were not improving as heat 2B rolled out on the circuit with Rae sitting at the rear of the field. In a show of his excellent racecraft, he moved the V9 forward to eventually finish in fourth place on a track that wasn’t lending itself to passing.
A win and a fourth was enough to place Jordy on the inside of row three for the all important A Main. With time constraints looming and numerous attempts at starting, the race started with a single file start. Again racing with Terry Rankin, Rae couldn’t hold the V55 off and settled for fifth.
Sitting inside the top three in points with rounds at Laang and Portland to go, Rae had this to say about his campaign so far:
‘I’m feeling pretty good about Speedweek so far, but a little bit disappointed in myself after a couple of mistakes I’ve made. I’m lucky that they haven’t cost me big points. Simpson has been the highlight, track was good and so was the car, and I enjoyed that!’
‘It’s a shame about Darlington, but I’m looking forward to the last two rounds at Laang and Portland, they’re both small racey tracks, and they should provide good racing.’

‘As always, massive thanks to my family, sponsors and supporters, Speedweek is a big commitment and I couldn’t do it without them. Let’s finish off strong!’
Rae Motorsport will be on track this Thursday night at Laang for round five of the Speedweek Series.
Thank you to our 2019/20 Supporters:
- TJ Chassis
- The Car Wash
- Laird Campbell Automotive
- AHR Media
- Westvic Sheds & Garages
- Heywood Lime
- HD Tilt Tray Services
- Max Fry Smash Repairs
- Jettco Developments
- Lethal Race Wings 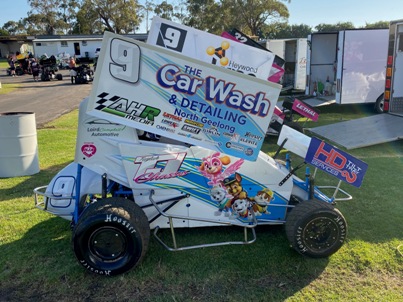