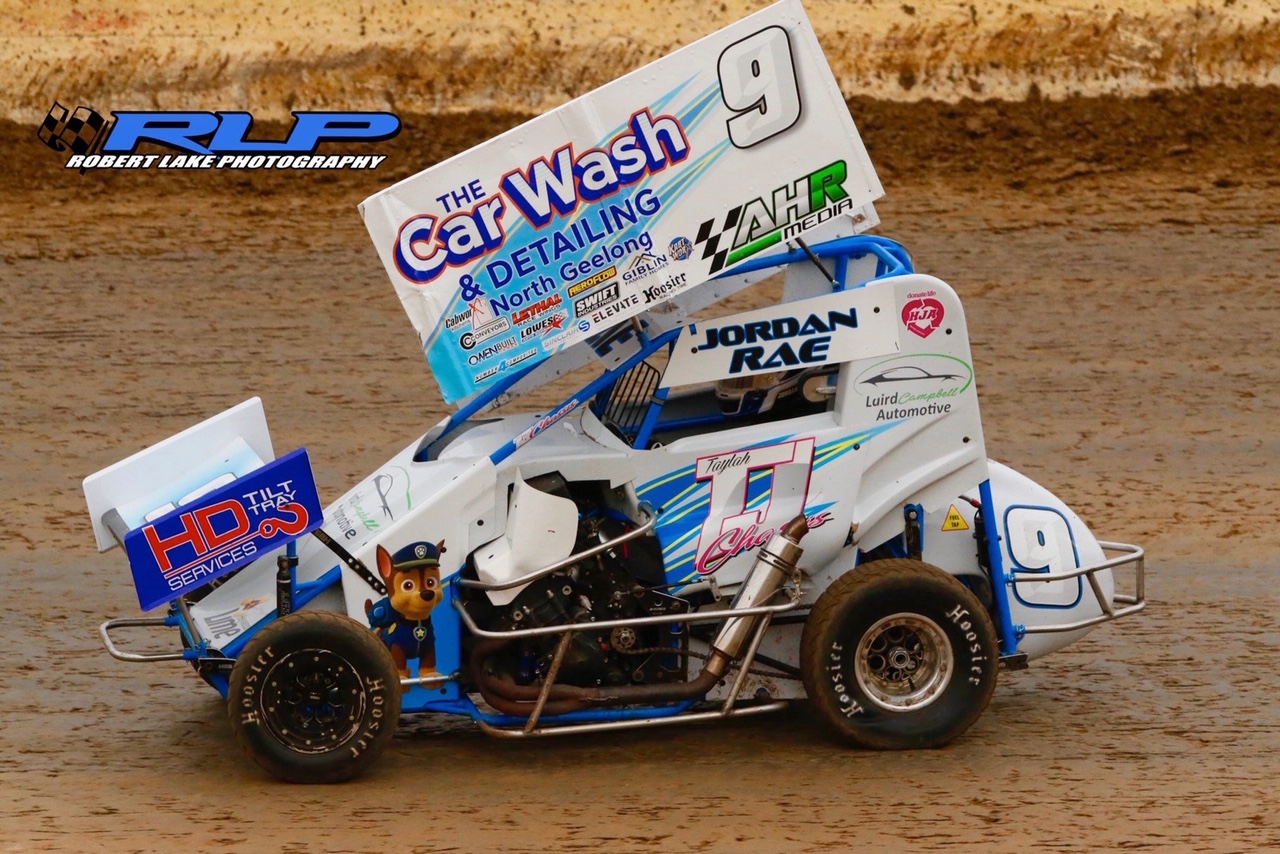 Victorian Formula 500 star Jordy Rae has experienced the highs and lows of Motorsport as he concluded the 2019/20 Speedweek Series. Whilst he had blistering pace and the skills set to capitalise, luck deserted him on two tracks which were to be his strongest.
Coming into round five at Laang Speedway, Rae sat second in points and was a last start winner at the venue. The opening heat went to plan from the front row, winning by 1.4 seconds. Heat two was a lot tougher with a talent laden heat and a slight misjudgement of the track making it hard to progress further than seventh from the rear.
Qualifying thirteenth for the A Main put the TJ Chassis pilot right in the danger zone in the middle of the pack. Wrong place wrong time saw Rae clip an inverted car, tearing the front wing off the V9. Not to be defeated Rae continued without the front wing, and battled gamely. Moving through the field despite his ailment, a half spin onto the infield set him back to the rear of the field. Moving forward once again, Rae again run out of luck as he was sent back to the rear for questionably hitting an infield tyre and dragging it onto the track. Still with a fast car under him, and unquestionable endeavour, Rae brought his car home in 11th to accumulate more valuable points.
Having won his first F500 A Main in the Stampede Series at Portland last season, Southern 500 Speedway was a track the 19 year old was looking forward to. Starting the opening heat on the fourth row, Rae drove superbly to second, chasing Terry Rankin right to the flag. The tables were turned in Rae’s second heat, starting from the front row and winning comfortably from Rankin.
Two Excellent heat races locked the V9 into pole position, with Rankin right beside him on the front row. But from the time he rolled out the gate, Rae knew there was something wrong with his car, and it was exposed as the green dropped. Commenting that it felt like the Yamaha had dropped a cylinder, it was later found to be a spark plug issue. Doing his best to finish and score points, Rae had to settle for 14th place in the last round of Speedweek.
All points were calculated, and Rae sat level on points for second overall with Jack Bell, behind Speedweek champion, Queensland’s Kaydon Iverson. Bell having scored more podiums was given the nod for second, whilst Rae was an excellent third place of the 61 drivers competing.
Rae had this to say about Speedweek: ‘I’m pretty happy with Speedweek, there was highs and lows, but that’s Motorsport. We did five nights of racing with very little damage, and managed to win a heat on four of the five nights, I’m happy with that! Congratulations to Kaydon and Jack and also all the other drivers in the top ten. Also massive thanks to Dad and Indy, along with the rest of my family, sponsors and supporters, you make it all possible. Special Thanks to Daniel and Erin Rethus(Heywood Lime) for letting us stay at their place for Speedweek.’
The opportunity to head home via Warrnambool for the Sungold Stadium night of ‘Open Wheel Mayhem’ was too good to refuse for Rae Motorsport, the event being a traditional Sunday night after Speedweek affair. Using a format unlike any other the opening session was qualifying hot laps, Jordy going second fastest in his group.
The fastest qualifiers were sent to the back for heat two, and had to pass cars to earn points. The V9 was hooked up and moved through to third, locking him into a front row start for the A Main.
Starting on the outside, a cracking first lap set Rae apart as he took the lead of the 20 lap final. Holding the position to the flag, it was a good win for the young man from Bannockburn at one of Australia’s most iconic tracks. Rae led home Tim Rankin and Dylan Willsher.
‘It’s pretty cool to win at the Bool! You have to be smooth to be fast at Warrnambool, and we had an awesome handling car that made my job easy! Thanks again to all involved, couldn’t live my dreams without you!’ commented Rae on his Premier Speedway success.
Rae Motorsport will be on trackon Saturday February 1 for round 3 of the TJ Chassis Stampede Series at Tolmer Speedway, Bordertown SA.
Thank you to our 2019/20 Supporters:
- TJ Chassis
- The Car Wash
- Laird Campbell Automotive
- AHR Media
- Westvic Sheds & Garages
- Heywood Lime
- HD Tilt Tray Services
- Max Fry Smash Repairs
- Jettco Developments
- Lethal Race Wings