Prosser on the Pace 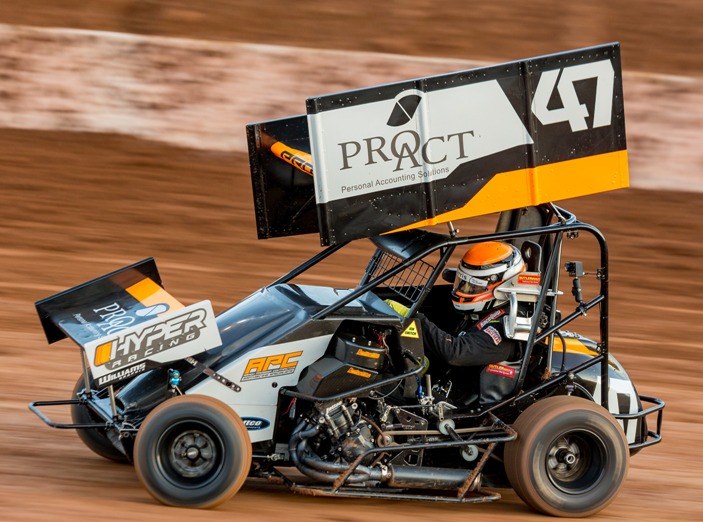 To say that Taylor Prosser has shown impressive form since recently stepping into Formula 500s would be quite the understatement.

Since graduating out of Junior Formula 500s earlier this season, the 16-year-old racer has made the giant step into senior Formula 500s. Despite it being a daunting task, he has not taken a backwards step.

After making his senior Formula 500 debut last month at Gympie’s Mothar Mountain Speedway, where he was running in second before suffering a delating tyre that saw him drop back to finish in fifth, Prosser has managed a pair of feature-race minor podium finishes: third at Brisbane’s Archerfield Speedway and then a second last Saturday night at Toowoomba’s Hi-Tec Oils Speedway. In the latter event, Prosser and winner Liam Williams lowered the lap record for Formula 500s.

“I’ve been having so much fun since moving into seniors and I’ve also been learning so much every time that I hit the track,” explained Prosser, who drives the Qld # 47 Aaron Prosser Contracting supported Yamaha R6 powered Hyper car.

“It’s been quite surprising that I’ve managed to run towards the front so early in my time in seniors but a lot of that is due to my two seasons spent in Junior Formula 500s and the experience I’ve gained from there.”

Heading into next season, Prosser, who resides in Burpengary, Queensland, is making plans for another big step, this time into 410 Sprintcars. The team has purchased a car package, which is a KRE Race Engines prepared 410ci engine that is coupled with a Cool car.

“My long-term goal has always been to move into Sprintcars and I’m very grateful that my family is helping me live out that dream,” he enthused.

“I know that there is a huge learning curve ahead in Sprintcars but I’m glad that I am gaining a lot of experience in Formula 500s before I make the step.”

Prosser’s plans for the rest of the season is going to be the remaining calendar in Queensland, which includes the Queensland Title at Ayr’s Pioneer Park Speedway on May 2, along with the Ken Willsher Classic at Laang Speedway in Victoria on April 25.