In what turned out to be a rough and tumble night of racing action at Manjimup Speedway, State Champion Steven Ellement again stood tall with a dominant performance in the feature event to claim the win in Round Five of the Stainless Fastener Supplies West Coast Series, proudly presented by TRS HD Mechanical.
Ellement claimed a win and a second place in his heats to be the equal high points scorer, his only defeat coming via Ryan Higgs in the second heat, with Higgs also claiming a second place in his other preliminary to be equal with Ellement, the two split by times for the Shuffle event. Nash Waldron and Brendon Marshman would claim the other heat wins in what was a great show, that also had its fair share of drama.
It began in hot laps when Matthew Edwards-Pope ran wide, collected the wall and rolled over, sustaining enough damage that he would miss his opening heat, but he was then able to return for the rest of the program.
Next it was Bryan Sharpe who went upside down in turn three in the third heat, ending his night early.
Ellement would then win the Shuffle event, while Jacob Priest grabbed the Mid Pack Madness event, and despite the drama from earlier in the night, we would have sixteen of the seventeen original starters able to greet the green flag in the main event.
Unfortunately for Steve Carter and Joel Watson it didn’t last longer than a quarter of a lap, as a six car pileup occurred in the first corner, with just the aforementioned two unable to restart.
Despite this rough start, the field would form up once again for a complete restart and this time the race would go flag to flag, with Ellement grabbing the lead immediately from Chris Dymock, with Higgs in third.
Jacob Priest was the big mover early, jumping into fourth place after starting seventh, where he was pursued by Brendan Wright who was having a great night after making the shuffle earlier and Troy Samwell who was looking for some solid points after playing his Ace Card.
Brendon Marshman’s race would be over after just one lap as he retired infield, but back on track it was still Ellement leading Dymock and Higgs.
Lapped traffic began playing its part on lap five, and Higgs would take advantage, grabbing second from Dymock on lap eight and at the same time Wright would wrestle away fourth from Priest.
Dymock didn’t give up, chasing Higgs hard and he even managed to retake second place on lap twelve, but Higgs wouldn’t have a bar of it and was back in front the very next lap.
Back up front though, Ellement was well and truly clear of the second and third place cars, lapping the fourth place competitor and crossing the line over ten seconds ahead of Higgs as the chequers flew. Dymock would hold on for third as the last car on the lead lap, while Wright and the returning Travis Bell would round out the top five finishers after Priest was relegated to seventh for an infield pass at the conclusion of the race.
With the nights results taken into account, Higgs still leads the Stainless Fastener Supplies West Coast Series by eighty one points, while Ellement is a clear second, with his Ace Card still to play. Courtesy of playing his own Ace Card last night Troy Samwell has moved into third place overall, shuffling Dymock (who also still has his Ace Card up his sleeve) back to fourth and Steve Carter to fifth
The Formula 500’s will now have a fortnight break before the sixth round of the Stainless Fastener Supplies West Coast Series, proudly presented by Alltorque Engineering, to be held at the Moora Speedway on the 16th of January, followed by a return to the Perth Motorplex on the 30th January in what will be the rescheduled event that was lost earlier in the season.
The 2020/21 Stainless Fastener Supplies West Coast Series, proudly presented by Corporeal Health, Alltorque Engineering, Ridgetech Roofing Pty Ltd, Burson Auto Parts Myaree, TRS HD Mechanical, Hedington Motorsports, JC Performance Heads, Three Springs IGA, Pope Racing, Opal Finance, Freo Group Pty Ltd. 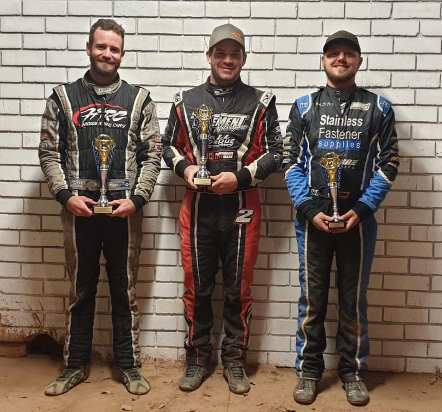